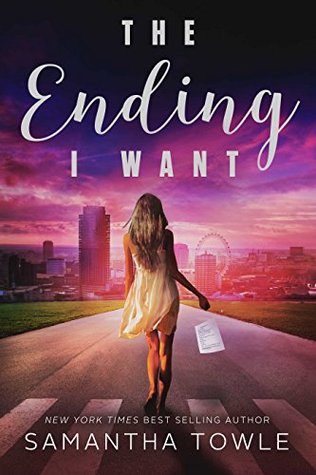 Taylor Shaw had the perfect life—until she was sixteen. That was when everything changed. From that moment on, life went from bad to worse…to the worst.
After recovering from a brain tumor, months later, she suffers the tragic loss of her whole family.
Since that fateful day, she’s been coasting through life.

Now, the brain tumor has returned, and Taylor decides she’s had enough. She’s going to take her fate into her own hands.
No more hospitals. No more surgeries. No more anything.
She’s going to join her family.
It’s her decision.
What she longs for.
The ending she wants.

She just has a list of things to do before she goes.
First, go to England.
Second, kiss a stranger…

Only, Taylor didn’t expect Liam Hunter, the stranger—with his handsome face, his six-foot-three of gorgeousness, and his oh-so-hot English accent—to change things.
To change her.
To change the ending she wanted.

What is a girl, who is standing on the edge of nothing, to do when offered the chance of everything?

As I’m sure you’ve seen through my other review, I generally love everything I read. Even the other book by Samantha Towle I absolutely adored (and then convinced Veronica to read it). However, this books was extremely problematic for me. I think it had more to do with the fact that, while contemporary isn’t my favorite genre, it felt unrealistic.

I had a difficult time with the two main characters, Taylor and Liam. To me their relationship doesn’t make sense. I get wanting to do things for yourself and on your terms. I get that potentially meeting someone can change your plans. But the way Liam and Taylor met, their adventures, it all felt fake. And maybe I am being a skeptic here. I know I’ve read other novels where events and meet cute was just as exaggerated. Sometimes it works really well, other times it doesn’t.

In the end, this felt like a mix between Me Before You and 50 Shades of Grey.