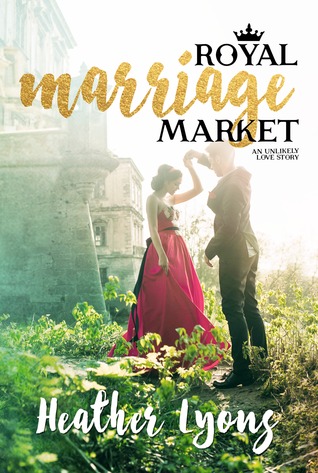 Every decade, the world’s monarchs and their heirs secretly convene to discuss global politics and social issues—and arrange marriages between kingdoms.

Elsa may be the Hereditary Princess of Vattenguldia, but she finds the entire situation archaic and unsavory. While she wants what’s best for her country, she isn’t about to jump into an unwanted relationship—let alone a marriage—with a virtual stranger. Of course, her feelings matter little to her parents, whose wheeling and dealings over trade pacts and alliances achieved at her expense begin the moment they set foot in California for the Summit. So when a blindingly handsome royal runs into her, she doesn’t hesitate to tell him there’s no way she’s marrying him.

Christian is all too happy to agree: no marriage. As the Hereditary Grand Duke of Aiboland, his main goal is to get through the summit without a bride being foisted on him. Which is why he suggests they help each other field potential intendeds. As Christian slowly gets to know Elsa, though, he realizes they have a lot more in common than just their feelings about the Royal Marriage Market. Only he can’t fall for her, because royal or not, they’re not meant for each other.

Elsa and Christian will have to evaluate matters of the heart verses those of state and crown, and decide whether or not tradition trumps love.

I wanted to like this book, so much. That is an empirical statement. I have read Heather Lyons’ other books- The Fate Series, The Collector’s Society, The Deep End of the Ocean. Each one was just as fascinating as the previous. She kept me enthralled, was able to tear my emotions apart. However, the Royal Marriage Market was less than spectacular. Actually, it fell short… like really short.

First, I got stuck on Elsa’s name. Maybe it wasn’t an intentional use of the name. Maybe that is just the character’s name? I understand this. BUT! Disney has a Queen Elsa, who is Scandinavian. I might be dramatic because my eye twitched. And of course all I saw was this blonde haired ice queen. But given that her full name is Elsa Victoria Evelyn Sofia Marie, could we have it mixed up? Give Elsa a different first name and she still be the same person? Probably. Speaking of names, the countries names! WHAT? I didn’t get them. They sound so fake. Doing research, Aiboland is a real thing… but Vattenguldia, nope it’s not (that I am aware of).

Second, it felt too wordy. Every statement Christian or Elsa made was followed with descriptors, upon descriptors, until I was to the point where I wanted to go read a children’s book for simply structured sentences. There were no back and forth conversations like you would normally see. Everything was prefaced with the POV of that character. And, maybe I missed them, but I didn’t read any descriptions of the characters. Maybe they were wrapped up in the complex sentence structures I had a hard time getting around.

The characters themselves felt one dimensional. Christian and Elsa didn’t want to be part of the RMM. They wanted to make their own choices. Their parents were the same- arranged marriage and you’ll do as I say or face the consequences! There was no real differentiation between each character’s voice, other than being told who is talking at the beginning of each section. And the action, or the juicy details, didn’t even make their presence known until 60% into the book. At that point, I just wanted to be finished.

That being said, I did enjoy the last 40% of the book. I liked the interactions Christian and his brother, Lukas, had. You could feel the sibling love (unlike Elsa and Isabelle). I appreciated Charlotte and Parker (Elsa and Christian’s personal secretaries). The Royal Marriage Market wasn’t a complete misadventure, but it wasn’t Lyons’ best work.

How do I start this… It’s been several days and my feelings are still mixed. Let’s start of with my favorite character.

Lukas. Every time he appears in the story, he makes it that much better. He is funny, real, and a great brother. His relationship with Christian is one of the best sibling relationships I’ve read in 2015.

I guess it is time to talk about my ‘mixed’ feelings. RMM is enjoyable. Once the story picked up, it was a breeze to read. Before that though… I questioned whether this was the book for me. It wasn’t the royal or romance side, but the writing itself. At times I was a little lost. At times it was hard for me to get through some sentences. I’m being lenient on that though because I was reading an ARC and not the finished product.

I both love and hate Elsa and Christian’s relationship. I like that they started of as friends, but disliked I was able to predict how it would go. I’m not saying everything that happened was predictable because Lyons threw me for a loop twice, but the ending was exactly as I thought it would end.

I did like that the story did not end at the end of the RMM. I loved that the story continued into weeks and months to come. I do wish I’d gotten more of Charlotte, and Elsa’s relationship with her father when she was younger. It would have been nice to see and not told.

Overall, if you are a fan of romance, I do think you will like this.

Disclaimer: Thank you KP Simmon at InkSlinger PR and Heather Lyons for giving Veronica and I the opportunity to read this ARC in exchange for an honest review. Receiving this book for free does not influence my opinion.