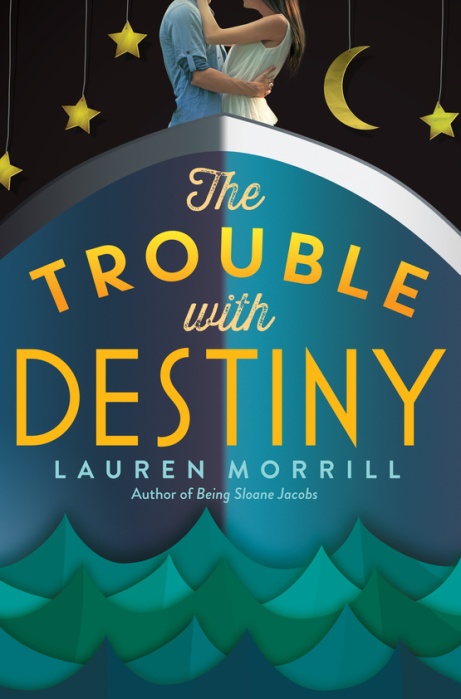 It’s not about the destination, it’s about the journey…

With her trusty baton and six insanely organized clipboards, drum major Liza Sanders is about to take Destiny by storm—the boat, that is. When Liza discovered that her beloved band was losing funding, she found Destiny, a luxury cruise ship complete with pools, midnight chocolate buffets, and a $25,000 spring break talent show prize.

Liza can’t imagine senior year without the band, and nothing will distract her from achieving victory. She’s therefore not interested when her old camp crush, Lenny, shows up on board, looking shockingly hipster-hot. And she’s especially not interested in Russ, the probably-as-dumb-as-he-is-cute prankster jock whose ex, Demi, happens be Liza’s ex–best friend and leader of the Athenas, a show choir that’s the band’s greatest competition.

But it’s not going to be smooth sailing. After the Destiny breaks down, all of Liza’s best-laid plans start to go awry. Liza likes to think of herself as an expert at almost everything, but when it comes to love, she’s about to find herself lost at sea.

For some reason all I can think of right now is the sugar cubes Finnick eats in Catching Fire. The Trouble with Destiny is a sweet, crunchy sugar cube. If it were a stuffed animal, I would squeeze it so hard because of all the feels it gave me. Alright let’s begin.

Liza is stressed, frazzled and has a one-track mind. All she can’t think is “Save The Band From Funding Cuts!” The band is on the Destiny for that very reason, The competition taking place on the Destiny that can give them the money they need so that the school can keep the band for another year. That is if they win of course. The entire trip she experiences, sabotages, misunderstandings, a broken heart, and hope.

What I really like that Lauren Morrill did is that in a fun way, TTwD shows the reality any schools are facing today. Public schools around the country are being forced to close the art and music departments due to funding cuts, just like Liza’s school is facing. It is a sad reality, one that seems will not be disappearing anytime soon.

TTwD also focuses on friendships. A big focus of Liza’s and Demi’s. Liza and Demi were best friends when they were young but one day it all fell apart when Liza was done being Demi’s twin. Both girls are enemies for most of the novel until they have a heart to heart and what really happened is said and moth make amends. I really liked seeing a good friendship gone bad, become something more than a sour note in both of the girls’ lives.

Last but not least we have Lenny. Lenny is an adorable teddy bear. At first, I was fooled. He seemed a little bit like the stereotypical air-head jock, but he is a lot more than he seems. Lenny’s  actions made him seem as air-headed and annoying, but he was doing those things intentionally. Lenny’s crush made him act in a way that fit the stereotype which made everyone oblivious as to what was really happening and where his actions were coming from.

The Trouble with Destiny was a breath of  fresh air. It was light, fluffy, and sweet. The perfect dessert after a long day of work.

You can preorder a copy here: Barnes & Noble | Amazon | Indie 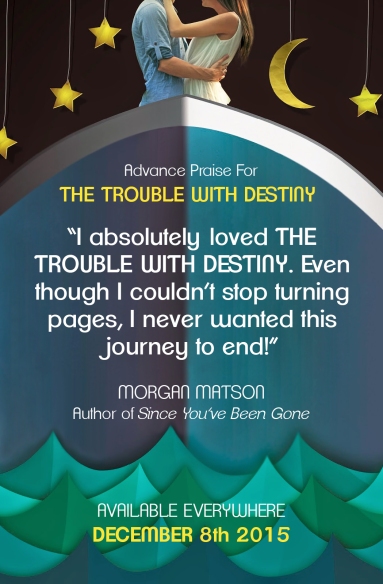 2 thoughts on “Book Review: The Trouble With Destiny by Lauren Morrill”