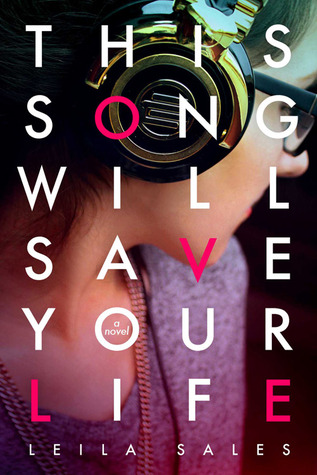 Making friends has never been Elise Dembowski’s strong suit. All throughout her life, she’s been the butt of every joke and the outsider in every conversation. When a final attempt at popularity fails, Elise nearly gives up. Then she stumbles upon a warehouse party where she meets Vicky, a girl in a band who accepts her; Char, a cute, yet mysterious disc jockey; Pippa, a carefree spirit from England; and most importantly, a love for DJing.

Told in a refreshingly genuine and laugh-out-loud funny voice, THIS SONG WILL SAVE YOUR LIFE is an exuberant novel about identity, friendship, and the power of music to bring people together.

At first I thought… a book about a girl that is suicidal?! I didn’t want to read it, but the whole DJ thing intrigued me cause I LOVE music. Then Kayla was like read it for me first and I was like OKAY! 🙂

You can say I read this book in two parts. I read the first half about 3 weeks ago and the other half tonight, and it was a good idea. Why? I coincidently stopped reading right before it all went down in the story. Anyways, let’s get down to business.

The main character, Elise, is not your typical suicidal girl. She is not craving attention. She just wants someone to see her and not just ignore her. I think we can all relate to her. We have all felt invisible at some point in our lives. What struck a chord in me were her habits and ways of dealing with life (not her suicidal tendencies, but how she dealt with life after her attempt).

My second year of college was a hard one. I was tired but wired a lot of the time. At night I would walk around campus, past midnight, trying to tire myself out so that I could sleep a few hours. I would put on my headphones and try to forget the world around me. Elise and I are so similar in that way because she would do the exact same thing to tire herself out, it was weird. I was like… how does the author know this I did?! I didn’t come across a underground party, or learn to DJ, but it was surreal to see a little of myself in Elise.

This story is so powerful because it shows us that this life is worth living. Yes, this world may suck at times (or a lot of the times) and we may not be happy with the cards life gave us, but we can make the best of it. The main message of this book is “Do not settle on being ordinary, be extraordinary”. We can all do that in our own individual ways if we try.

I really wish we got to see more of Henry though. That’s my only complaint. 🙂

2 thoughts on “Book Review: This Song Will Save Your Life by Leila Sales”