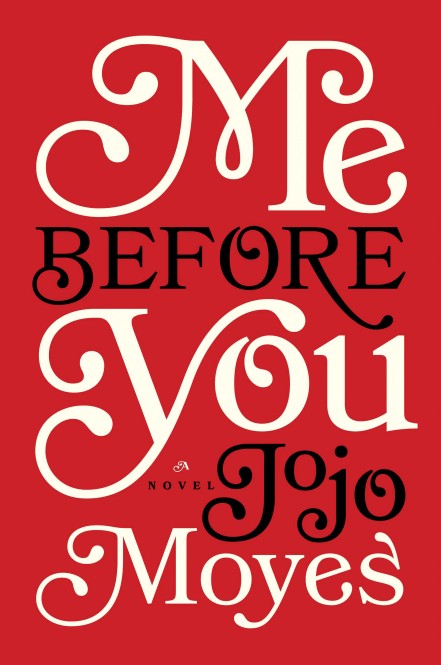 They had nothing in common until love gave them everything to lose . . .

Louisa Clark is an ordinary girl living an exceedingly ordinary life—steady boyfriend, close family—who has barely been farther afield than their tiny village. She takes a badly needed job working for exMaster of the Universe Will Traynor, who is wheelchair bound after an accident. Will has always lived a huge life—big deals, extreme sports, worldwide travel—and now he’s pretty sure he cannot live the way he is.

Will is acerbic, moody, bossy—but Lou refuses to treat him with kid gloves, and soon his happiness means more to her than she expected. When she learns that Will has shocking plans of his own, she sets out to show him that life is still worth living.

A Love Story for this generation, Me Before You brings to life two people who couldn’t have less in common—a heartbreakingly romantic novel that asks, What do you do when making the person you love happy also means breaking your own heart?

At first, I didn’t think I would love this book. I was a little put off because I imagined a 20/40 age thing, but I am so happy I was wrong.

I know this is an adult fiction book if we are putting labels, but a lot of people in the YA book aficionado community loved it, so I decided to give it a chance. (It also helps that I won the audiobook of Me Before You in a giveaway)

Oh My, Me Before You just blew me away. I don’t know if it was because I had no expectations when it came to this author or that I knew nothing of the story, but I fell head over heels with this book.

In the first few chapters as the author was setting the stage, I was a little bored. I believe part of the reason for that was because I am not from London, nor am I English. Reading a book set in England, with English characters who are culturally and geographically English kinda threw me off at first. In a way I could explain it as I was culturally shocked. I got over it pretty quickly though.

Will and Lou are the main characters in this story and the antagonist in the book would be Will’s disability. As stated in the synopsis, Will was leading a very normal life for a man of his stature until the day he was a pedestrian victim of a motorcyclist accident. Lou on the other hand is a average, drama-free 27 year old girl who has the burden of supporting her entire family and carries a dark secret that no one knows.

Two unlikely people meet under very unfortunate circumstances, but something heartbreakingly beautiful comes out of it. The themes of pain, friendship, loyalty, and the very controversial topic of assisted suicide are seen constantly through the novel.

As I was reading the story, I felt everything Lou felt. Every discovery, every high and low, I felt it all. We do get to see the POV of a few other characters throughout the book, but for the most part, we see everything through the same lens, through Lou.

The Epilogue made my chest feel tight with emotion, and to bear with the bittersweetness of it all I have created an alternate ending to the book where I get the ending I wish I would have gotten. Me Before You does not have a bad ending, I just wanted something else.

Overall, this book surprised me. It made me love a whole new world, and become attached to a bunch of characters I normally wouldn’t meet. Me Before You was beautifully written.

Disclaimer: I do not want to spoil this book for anyone, but without spoiling it I will say that I am not for assisted suicide. I may be judged harshly for this statement, but that is my answer to this touchy subject. I may understand why people do it, but I do not condone their actions.

10 thoughts on “Book Review: Me Before You by Jojo Moyes”