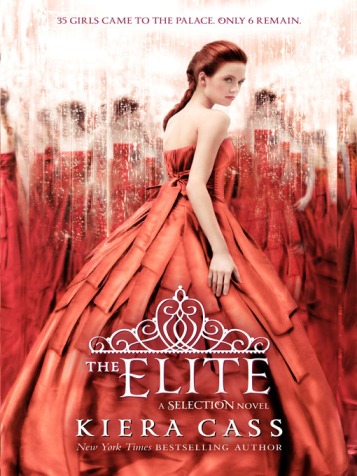 The hotly-anticipated sequel to the New York Times bestseller The Selection.

Thirty-five girls came to the palace to compete in the Selection. All but six have been sent home. And only one will get to marry Prince Maxon and be crowned princess of Illea.

America still isn’t sure where her heart lies. When she’s with Maxon, she’s swept up in their new and breathless romance, and can’t dream of being with anyone else. But whenever she sees Aspen standing guard around the palace, and is overcome with memories of the life they planned to share. With the group narrowed down to the Elite, the other girls are even more determined to win Maxon over—and time is running out for America to decide.

Just when America is sure she’s made her choice, a devastating loss makes her question everything again. And while she’s struggling to imagine her future, the violent rebels that are determined to overthrow the monarchy are growing stronger and their plans could destroy her chance at any kind of happy ending.

I read this book in one sitting. ONE SITTING. I absolutely loved it. Prince Maxon was such a sweetheart, except for this one time where I was really mad at him. Hormones, Ugh. I really liked Maxon’s mother, the Queen. She brought stability and hope. I really think the Queen is a symbol of what the kingdom would be like if given the opportunity, or more better said, the right to have the ability to rise, to better themselves. Your caste number does not define you, it is the type of person you are that ultimately defines you. We can see this with Celeste. She may be of the second highest caste, but inside, she is a horrible human being. On the other hand, America, who does have her fair share of imperfections and moments of horrible judgement of character, is a better person overall and cares for others. She is always trying to help others, even at the cost of it affecting her in a negative way.

I was annoyed with America many times in the book. Like I said earlier, she can be a horrible judge of character. I also really disliked Aspen and the way he was trying to weasel into America’s heart by making Prince Maxon look bad at all costs. I do feel like the selection is dragging a little long. I hope we get to see more of the rebels in The One.