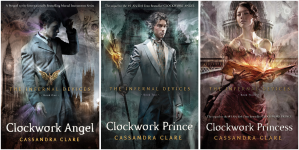 Passion. Power. Secrets. Enchantment. The Shadowhunters of the Victorian Age delve into all of these—in addition to darkness and danger—in the Infernal Devices trilogy.

In a time when Shadowhunters are barely winning the fight against the forces of darkness, one battle will change the course of history forever. Welcome to the Infernal Devices trilogy, a stunning and dangerous prequel to the New York Times bestselling Mortal Instruments series.

The year is 1878. Tessa Gray descends into London’s dark supernatural underworld in search of her missing brother. She soon discovers that her only allies are the demon-slaying Shadowhunters—including Will and Jem, the mysterious boys she is attracted to. Soon they find themselves up against the Pandemonium Club, a secret organization of vampires, demons, warlocks, and humans. Equipped with a magical army of unstoppable clockwork creatures, the Club is out to rule the British Empire, and only Tessa and her allies can stop them….

I had just finished reading The Mortal Instruments when I learned of this trilogy’s existence. I was a bit timid about getting to it because I fell in love with the shadowhunter world in the TMI series and I was worried that a historical prequel would ruin it. I was really nervous about it, but I did hear great things about the Infernal Devices so I thought, “What harm can reading the first book do?”

WOW! Where do I begin?! Clockwork Angel hooked me in and brought me all the way to Clockwork Princess and became my favorite trilogy of all time. I honestly loved this trilogy so much more than Clare’s Mortal Instrument series. The time period and setting was way more interesting. Even though there were less books, I felt that the characterization was more significant.

What really got me hooked was William Herondale! He is now and probably forever will be my favorite male character. He has so much depth within him and when he was first introduced with all his snarky attitude, glory, and sarcasm, I knew he had me. His back story was very heartfelt and explains his every action. Will wasn’t the only one who captured my heart. His parabatai, Jem Carstairs, did as well. I don’t love him as much as Will, but he is also a great character with his own heartbreaking story. What surprised me more was my love for the lead female character, Tessa Gray. I am usually frustrated with female leads because sometimes they make horrible decisions, but it was different with Tessa. I found that I could somewhat relate to Tessa. While I detested some of the characters from TMI, I absolutely loved all the characters in TID (and yes, that means the secondary characters as well. Those Lightworms). Of course, I’m not including the villains and cohorts.

This trilogy is definitely worth reading and if you weren’t too attached to Clockwork Angel, keep pressing on because the trilogy only gets better. Clockwork Princess was the most heartbreaking book I probably have ever read. I read it all in one sitting, and I went through a roller coaster of emotions and cried for about an hour after finishing. It was beautifully tragic and I felt that it did justice to the series. It was an amazing solid ending to the series.

Day 9: A book you thought you wouldn’t like but ended up loving

“For me that would have to be Clockwork Angel. City of Bones had not impressed me and I wasn’t sure I would like Cassandra Clare’s new Shadow-hunter series, but I was wrong. It was a good surprise.”