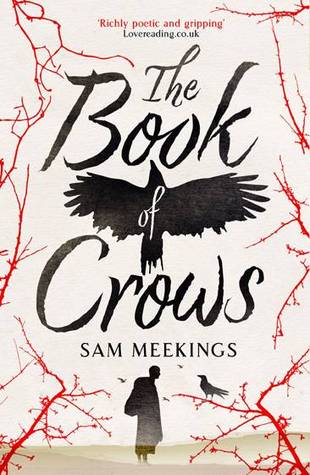 Before we get into the nitty-gritty of the review, first I want to talk about the unique way I read this book. I read The Book of Crows on The Pigeonhole. They are a website where you buy a book and read it collectively with other people. You say isn’t that a book club and can’t we do that right now? What guarantees me someone won’t read ahead? Well… the thing about The Pigeonhole is that they release staves approximately each night, so everyone is at the same spot in the book as everyone else. This gives you the opportunity to read the book and discuss it in real time. I thought it was pretty neat and if it weren’t for this format, I most likely would have never read a book like The Book of Crows.

A young girl is kidnapped and taken through the desert to an isolated mountain brothel. Two thousand years later, after a suspicious landslide near Lanzhou, a low-level bureaucrat searches for a missing colleague. A thirteenth-century Franciscan monk, traversing the Silk Road, begins his extraordinary deathbed confession, while five hundred years earlier, a grieving Chinese poet is summoned to the Emperor’s palace.

In a series of delicately interlaced stories, Sam Meekings’ richly poetic and gripping second novel follows the journeys of characters whose lives, separated by millennia, are all in some way touched by the mysterious Book of Crows, a mythical book in which the entire history of the world – past, present and future – is written down.

Holy Crap. That ending. I didn’t see it coming at all. But… Alright, let’s rewind…

At the beginning of the story we learn about a woman who is now in a whorehouse, and a man on a journey to find his friend. It starts off slow, but picks up quickly and you start piecing the story together. As you continue to read, more characters are brought to light and you start seeing how each character is connected to The Book of Crows. Many want to find it, while others want to destroy it. There is great mystery surrounding the book that has been revered and searched for centuries.

Each character’s story you are introduced to throughout the book is in a different time era. I really enjoyed this because the reader is able to see how much intrigue and chaos the book has caused. It’s legacy has lived through many generations.

Overall, I really like the concept, how the story was set up, and how each key part of the story was revealed. I believe that reading it in staves how The Pigeonhole set it up made my reading experience better because you had to hold on and ponder on what you read, adding to the mystery of it all.

Disclaimer: I’d like to thank The Pigeonhole for providing me with a copy of The Book of Crows. Receiving this book for free does not influence my opinion in any way.