Seventeen-year-old Cassie Hobbes has a gift for profiling people. Her talent has landed her a spot in an elite FBI program for teens with innate crime-solving abilities, and into some harrowing situations. After barely escaping a confrontation with an unbalanced killer obsessed with her mother’s murder, Cassie hopes she and the rest of the team can stick to solving cold cases from a distance.

But when victims of a brutal new serial killer start turning up, the Naturals are pulled into an active case that strikes too close to home: the killer is a perfect copycat of Dean’s incarcerated father—a man he’d do anything to forget. Forced deeper into a murderer’s psyche than ever before, will the Naturals be able to outsmart the enigmatic killer’s brutal mind games before this copycat twists them into his web for good?

I am dead. No pun intended.

I was a huge fan of The Naturals, but Barnes just went ahead and blew me away with the sequel.

Killer Instinct is everything you’ve wanted. It’s dark, it’s gritty, and addicting. You have the action, the sick twisted mindset of the killer, and the relationships between the naturals. I wish this were a tv show.

In Killer Instinct we have the gang in the aftermath of what happened with Cassie and “agent” Locke. As Cassie deals with the aftermath, a copycat shows up, but it’s not just any killer he is copying, but Dean’s dad. MO right to the t. The entire time we are dealing with the team trying to solve who is the copycat, if the naturals program will be dismantled with Agent Sterlings presence now in the mix, and Cassie’s inner turmoil of Michael or Dean.

Now don’t be turned away because we have love in the mix. Ms. Barnes does it in a very tasteful way which actually adds to the story and doesn’t take away from it.

At the end of the day, if you haven’t read Killer Instinct (or The Naturals) please do so. You will not regret that decision.

This week I’m not starting off with a review, but with a discussion post! Something that really irks me is the lack of YA Contemporary novels that deal with Spies, Government Agencies, and Conspiracies. We have a wide variety pretty much of any sub-genre, but not this one. Why is that? Is it because there isn’t such a big demand or there aren’t enough authors writing these types of stories?

Yes, we have spies, assassins, and government agents in dystopian novels, sci-fi novels, and fantasy novels, but not in contemporary novels. I say that it isn’t fair. Sometimes I just want some spies in my life you know? One of the reasons I love Ally Carter is because Spies, Government Agents, Conspiracies, Con-artists are the things she writes about in a pure contemporary world. Jennifer Lynn Barnes who is Ally Carter’s friend also writes in these sub-genres. Apart from them, I don’t know other authors that focus solely on that.

I would have included “The Name is the Star” by Maureen Johnson, but it is a paranormal contemporary novel. It’s not pure contemporary and that is where it irks me. We have action movies that do not have sic-fi, paranormal, fantasy, or dystopian elements to them, but where are the books that are just pure action and suspense? That is my question. That is what I want people to answer me.

I want to hear from you now. Do you like to read these type of novels or do you prefer this spy, assassin, etc., thing when it is in a dystopian or fantasy world (ex: Delirium , Throne of Glass, etc.)? and why?

Hopefully you will shed some light on this subject because it’s just not fair. Not fair at all. 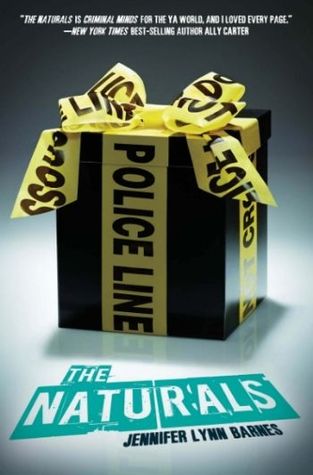 Seventeen-year-old Cassie is a natural at reading people. Piecing together the tiniest details, she can tell you who you are and what you want. But it’s not a skill that she’s ever taken seriously. That is, until the FBI come knocking: they’ve begun a classified program that uses exceptional teenagers to crack infamous cold cases, and they need Cassie.

What Cassie doesn’t realize is that there’s more at risk than a few unsolved homicides— especially when she’s sent to live with a group of teens whose gifts are as unusual as her own.

Sarcastic, privileged Michael has a knack for reading emotions, which he uses to get inside Cassie’s head—and under her skin. Brooding Dean shares Cassie’s gift for profiling, but keeps her at arm’s length.

Soon, it becomes clear that no one in the Naturals program is what they seem. And when a new killer strikes, danger looms closer than Cassie could ever have imagined. Caught in a lethal game of cat and mouse with a killer, the Naturals are going to have to use all of their gifts just to survive.

I’d read one of Ms. Barnes books before and I liked it….a lot! It wasn’t a murder mystery like this one, but it had to deal with spies and government operatives. I’m a sucker for those stories.

Now, let’s talk about The Naturals. I really like this book. The main character, Cassie, is very observant, or what the FBI would call a profiler only she doesn’t know it until she gets the attention of the FBI one day. She knew she was different because she never fit in wherever she was. Cassie gets recruited into the The Naturals program, where other teenagers also have a natural ability whether it is to tell if someone is lying, what their emotions are, or how to profile people.

When Cassie gets to the program, she meets what I call the “Fantastic Four”, soon to become the “Fantastic Five”. Each teenager has one specific talent: Lia can lie like nobody’s business and also detect lies, Michael can read emotions off a person and has a very good poker face, Sloane sees the world through a mathematical point of view and can hack any government program or database, and Dean is a profiler, just like her.

The “romance” in the story takes the back burner throughout the whole book, and sometimes its hard to pick up the subtle hints here and there. Some of you may be Team Dean or Team Michael, but what I loved the most was the case and how all five of them even though they are messed up, can do good in the world one case at a time. It’s like a teenage Bones/CSI crossover. I love it!

Ms. Barnes has a PhD in Psychology and Cognitive Science, and her knowledge is sprinkled throughout the book. I absolutely love it when authors add their area of expertise to their novels. It takes the books up another notch!

Is it just me or are there not that many YA crime novels? Some of my favorite shows are Bones, White Collar, Psych, Monk, etc, and I would love to not just watch shows like those, but also read some novels like the shows. One of my go to authors for spies and con-mans is Ally Carter. She has the Heist Society Series which follows a family of high class thieves, and The Gallagher Girls series which follows Cammie, a spy-in-training destined to become the next legend.

Another author I’ve gone to is Jennifer Lynn Barnes with her The Squad Series (Gov’t OPS/Spies), and her most recent novel, The Naturals, which follows five teenagers with extraordinary talents that help the FBI solve cold cases. There is also these two phenomenal sisters, Lisa and Laura Roecker, who write about secret societies and murder. Lastly, we have Kara Taylor’s debut novel, Prep School Confidential, which is another murder mystery story that takes place within the walls of a high class preparatory.

Apart from the authors I mentioned above, I don’t really know about other crime/secret society novels within YA. This sub genre within YA is not very well known or talked about, which is why I assume there aren’t many books in the genre.

I really wish there were more…. Anyone else think the same thing?

Bayport High operates like any other high school–jocks at the top, outsiders at the bottom, and everyone else in between. Enter Toby Klein, a sophomore computer hacker who doesn’t play well with others. She has zero school spirit, a black belt in karate, and what her guidance counselor calls an attitude problem. She’s the last person you’d expect to be invited to join the varsity cheerleading squad.
But things are different at Bayport.
Bayport’s varsity cheer squad is made up of the hottest of the hot. But this A-list is dangerous in more ways than one. The Squad is actually a cover for the most highly trained group of underage government operatives the United States has ever assembled. Athletically, they’re unmatchable, though they make it all look easy on the field. Mentally, they’re exceptional–but with one flash of their gorgeous smiles, you’ll completely forget that. Socially, they’re gifted, so they can command and manipulate any situation. And above all, they have the perfect cover, because, beyond herkies and highlights, no one expects anything from a cheerleader.
Toby Klein might not seem like the most likely recruit, but she’s never been one to turn down a challenge. If she can handle the makeover, Bayport Hight may just have found its newest cheerleader.

The first time I tried to read this book I was like, “NO… NO… Why did I buy this book again?!” I put it down for about 2-3 weeks and decided to give it a second chance a few days ago. Boy was I happy I did because it just became one of my favorite books of 2013. It is fun to read, it is witty, it has great, strong female characters, and it is action packed. It made me look at a cheerleader in a whole new way.  Even though I had a lot of work to do, I still managed to finish this book in one day. Talk about accomplishment right there.

I recommend this book to anyone that is stressed out. Get past the first two chapters and you’re going to thank me I told you to read it. Go on now.. GO BUY IT!

If you want to know more about the book and discuss it with me, leave a comment below! I’m all for talking about it!