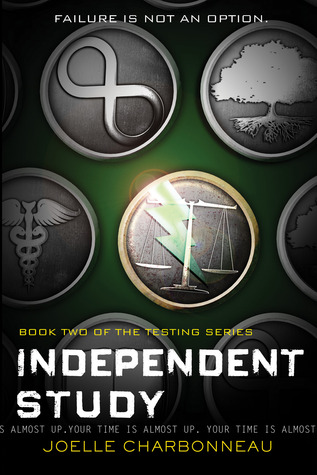 In the series debut The Testing, sixteen-year-old Cia Vale was chosen by the United Commonwealth government as one of the best and brightest graduates of all the colonies . . . a promising leader in the effort to revitalize postwar civilization.

In Independent Study, Cia is a freshman at the University in Tosu City with her hometown sweetheart, Tomas—and though the government has tried to erase her memory of the brutal horrors of The Testing, Cia remembers. Her attempts to expose the ugly truth behind the government’s murderous programs put her—and her loved ones—in a world of danger. But the future of the Commonwealth depends on her.

Honestly? I was freaking out. The Testing left off with a  HUGE cliffhanger that I didn’t know where this was going. I didn’t bring my hopes up just in case it wasn’t as good as The Testing. Sometimes sequels can be disappointing.

Oh Boy. Oh Boy. Oh Boy. I’m so giddy because this book surpassed my expectations. I’m internally jumping up and down right now. I’m really starting to like Cia. The development of her character was awesome and we also got to finally know what happened to Zendra and Tomas. Dun Dun Duuuuuun!  I’m not going to tell you guys, so go read the book if you haven’t.

Independent Study did not fall into the sequel slump category (or is it the sophomore category? I forget). It felt as an equal to the first book. Great sequel. The action, The politics, The Action (yes, I had to say that again) and The never ending tests. It was all brilliant! I started reading around 9 or 10 pm and finished it at 1am. I couldn’t even fall asleep because it had my blood pumping and the adrenaline rushing through my body.

I know a lot of people don’t like The Testing Trilogy because it has a few similar qualities to THG. I think being compared to THG is an honor and shouldn’t be a turn off if you’re planning on reading the book. Marketing is a tricky business and sometimes the marketing team of the publishing companies take risks and say stuff like “The Next Hunger Games” because they are trying to say, “Guys this is good and has some of the same traits as THG so if you liked THG you might just like this one too!” Sometimes slogans like these do get overused (I’m looking at Twilight and how it gave vampires a VERY negative light.)

Overall, read this book and read this series. It’s amazing!

Keep your friends close and your enemies closer. Isn’t that what they say? But how close is too close when they may be one in the same?

The Seven Stages War left much of the planet a charred wasteland. The future belongs to the next generation’s chosen few who must rebuild it. But to enter this elite group, candidates must first pass The Testing—their one chance at a college education and a rewarding career.

Cia Vale is honored to be chosen as a Testing candidate; eager to prove her worthiness as a University student and future leader of the United Commonwealth. But on the eve of her departure, her father’s advice hints at a darker side to her upcoming studies–trust no one.

But surely she can trust Tomas, her handsome childhood friend who offers an alliance? Tomas, who seems to care more about her with the passing of every grueling (and deadly) day of the Testing. To survive, Cia must choose: love without truth or life without trust.

I went into this book blindly. It was on the Kindle Daily Deals and I decided… why not? So I bought it for a couple bucks and decided to read it. I love it when blind purchases turn out great!

Oh My Gosh. This book was absolutely amazing. Some people hate that it is marketed as the next Hunger Games, but honestly, I don’t care. In my head it’s the love child of Divergent and The Hunger Games. Just think Dauntless, Erudite, and the actual Hunger Games. Crazy right?

We start of with Cia on her graduation day where she goes from being labeled a child into actual adulthood and she can be a candidate for The Testing. The government chooses the candidates for The Testing, and only the brightest are chosen. The Testing is a test which determines if you are able to go to University and therefore become a future leader of the United Commonwealth.

After Cia’s graduation everything unravels and her world is turned upside down. The Testing is not what she thought it was. Her father who is a alumnus of the University advices her not to trust anyone and to try to survive the tests.

The rest of the book has you on the edge of your seat. Who is a friend and who is a foe? Who can be trusted and who is a Judas? The author did a very good job at weaving the story and creating it in a way that we aren’t bored. It may be dystopian and we may have seen some of the plot before but the way it was written, she made the plot look fresh, new, and that is what good writing is all about.

I recommend this book and advice you to read it!

The sequel, Independent Study, comes out today, January 7, 2013. Go to your local bookstore and grab the first two books. Trust me, you won’t regret it!