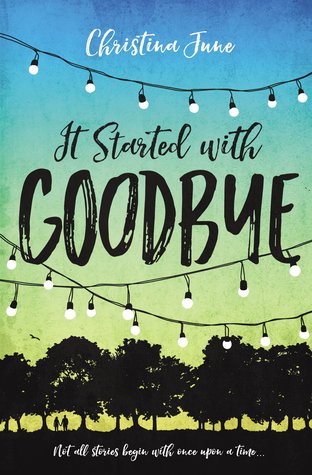 Sixteen-year-old Tatum Elsea is bracing for the worst summer of her life. After being falsely accused of a crime, she’s stuck under stepmother-imposed house arrest and her BFF’s gone ghost. Tatum fills her newfound free time with community service by day and working at her covert graphic design business at night (which includes trading emails with a cute cello-playing client). When Tatum discovers she’s not the only one in the house keeping secrets, she finds she has the chance to make amends with her family and friends. Equipped with a new perspective, and assisted by her feisty step-abuela-slash-fairy-godmother, Tatum is ready to start fresh and maybe even get her happy ending along the way.

I was surprised by this book many times. At first I thought it would be an angsty “woe is me” book. Then I was like ahhh something horrible is going to happen towards the end and it will ruin my ship. But none of my theories or guesses happened (except for who Shay was).

We start of at the Police station. Tatum, her friend Ashley, and Ashley’s boyfriend are arrested. Why are they arrested? Because Ashley’s bae decided to steal a whole bunch of smartphones. Now Tatum is stuck with a fine and community service even though she knew nothing of what Ashley and her bf had planned on doing that day they went to the mall. She was in the wrong place at the wrong time.

The story progresses as Tate struggles with being under house arrest under her stepmother’s watchful eye. Her stepmother Belen is very harsh on her and her step sister Tilly hardly acknowledges her existence. To make things worse, her father goes out of the country so she is left alone with her step-family. Throughout the entire book, Tate learns that the people closest to you can disappoint you, that making new friends may not be as bad as she thought it would be, that forgiving others is always good even though it takes time for the person you forgive to realize their mistake (Yes, I am talking about Ashley) and that you shouldn’t judge others, especially if you haven’t taken the time to properly get to know them (Her stepmother Belen and her stepsister Tilly).

My favorite character’s were Abby (Her new friend and journalistic wiz) and Blanche (Belen’s mother, Tilly’s grandmother). They both brought humor and the reality check that Tate needed. They were great support systems, yet they didn’t baby Tate. Loved this!

Overall, It Started With Goodbye, is a solid debut. I will keep a lookout for Christina June’s next novel.

(P.S. I didn’t write about the romance/ship in this novel because while it is in the story, I liked that it wasn’t the main point so I shall keep it that way.)

Disclaimer: I’d like to thank Blink/Harper Collins for providing me with an ARC of this novel. Receiving this novel for free does not sway my review.