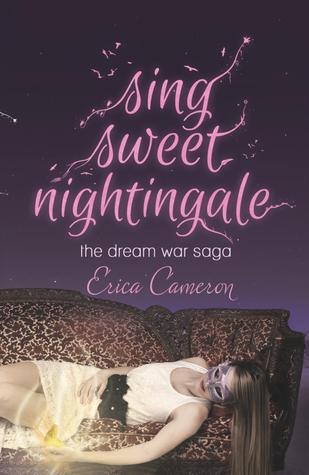 She pledged her voice to Orane, the man she loves—someone she only sees in her dreams. Each night, she escapes to Paradise, the world Orane created for her, and she sings for him. Mariella never believed she could stay in Paradise longer than a night, but two weeks before her eighteenth birthday, Orane hints that she may be able to stay forever.

Hudson Vincent made a pledge to never fight again.

Calease, the creature who created his dream world, swore that giving up violence would protect Hudson. But when his vow caused the death of his little brother, Hudson turned his grief on Calease and destroyed the dream world. The battle left him with new abilities and disturbing visions of a silent girl in grave danger—Mariella.

Now, Hudson is fighting to save Mariella’s life while she fights to give it away. And he must find a way to show her Orane’s true intentions before she is lost to Paradise forever.

I had such a hard time with this book. I feel like that has been the trend recently with the ARCs I’ve read. I though the idea behind the story was interesting, but it turns out, it wasn’t written well.

The book opens with Hudson taking a walk with his little brother. It then jumps to a fight scene, and his little brother dies. This sets the whole book in motion. He is part of this dream world where a beautiful women has made him promise to never fight again… but he breaks that promise. Then he finds out she is a demon controlling him. He breaks from her and gets some weird “powers”. (Is this trying to be a twist on X-Men, on how they received their powers?) Then he has a dream about a girl, Mariella, who he has to save.

It is super confusing. I didn’t understand how Hudson broke from Calease, or where these powers came from. And why did his dream choose Mariella? Why is she so significant?

Mariella is a stubborn character who was frustrating the whole time. She is naive, but not in an innocent kind of way. She doesn’t speak, so you hear her thoughts… and they are so freaking repetitive I couldn’t stand it.

I think the idea- demons presenting themselves as angels in dreams to trap your soul and suck the life out of you- could be a good book… if it was written well, had better climaxes linking the characters to each other, and less repetitive moments. I think the author should have outlined more and fleshed out the characters more. In the end, I didn’t care if anyone lived or died. I just wanted to book to end.

I would like to thank NetGalley and Spencer Hill Press for the opportunity to read this ARC. Receiving this ARC for free in no way influences my review.