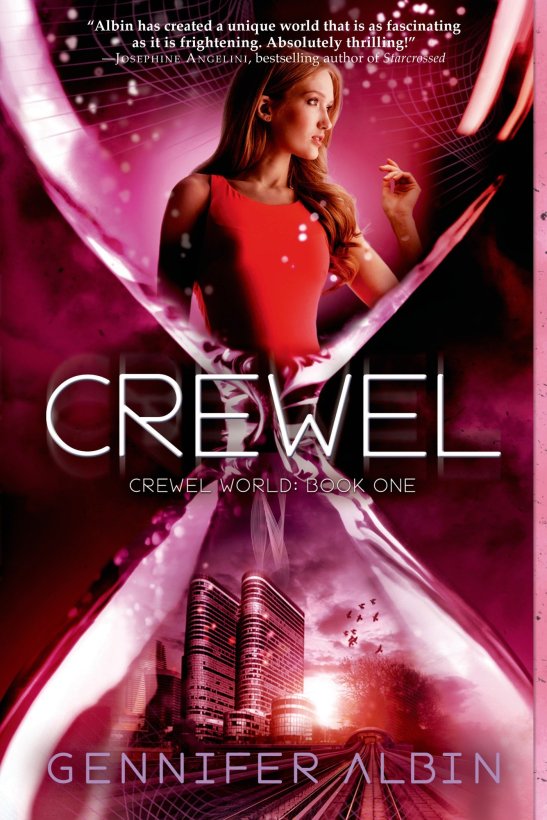 Incapable. Awkward. Artless. That’s what the other girls whisper behind her back. But sixteen-year-old Adelice Lewys has a secret: She wants to fail. Gifted with the ability to weave time with matter, she’s exactly what the Guild is looking for, and in the world of Arras, being chosen to work the looms is everything a girl could want. It means privilege, eternal beauty, and being something other than a secretary. It also means the power to manipulate the very fabric of reality. But if controlling what people eat, where they live, and how many children they have is the price of having it all, Adelice isn’t interested.

Not that her feelings matter, because she slipped and used her hidden talent for a moment. Now she has one hour to eat her mom’s overcooked pot roast. One hour to listen to her sister’s academy gossip and laugh at her dad’s jokes. One hour to pretend everything’s okay. And one hour to escape.

Because tonight, they’ll come for her.

I’d never heard of Ms. Gennifer Albin which nowadays is probably a good thing for authors. It’s rare when you’re a blogger and you NOTHING about the author. News travels fast in this industry.

(Warning: This entire review may feel discombobulated, but forgive me for giving you such quality. I don’t think I can make I more coherent one though. This book just left me…. *mind blown*)

Woah… this was an intense book. It’s been at least a little over a week since I finished it and I still can’t fully digest it. The world Ms. Albin created is so different yet it almost seems plausible that it messes with your head so much that you’re left stupidly smiling yet utterly confused. Confused in a good way though.

The entire book is in Adelice’s point of view and in a short amount of time in the beginning we come in contact with so many characters that at first it’s a little overwhelming. At a certain point you feel like there is a love triangle coming on and you groan to yourself, but trust me, it’s not a love triangle and it get’s better once you figure out what’s really going on. muahahahhaha

This is 100% a young adult science fiction novel. I don’t even think we find out what year it is so I can’t even say it has a little bit of dystopian in the mix at this point, but I can assure you that we will know by the end of the second book (or at least I hope we do).

What I really liked about this book was the entire concept of weaving. In Crewel, you can weave something in or out of existence. Very few are those that have that gift. The main character is one of those few that can weave and what is so amazing about her is that she can weave without having to use the special weaving board provided by Arras (whom is the country/government).

This is a pretty solid first book in the series and I cannot wait to pick up the second book. 🙂