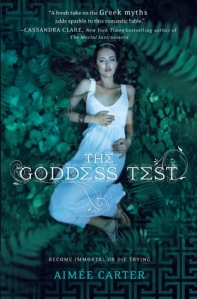 For this week’s Young Adult Fantasy Spotlight, I picked a book that I read and instantly fell in love with. This book had Greek mythology written all over it, and I had decided to read it because:

a) Let’s face it, I love Greek mythology.

b) I had just read Mark of Athena by Rick Riordan and I needed my Greek myth fix.

The Goddess Test definitely did it for me. This is the first book in the trilogy, and trust me, it gets better with each book. It was an easy read, fast paced, and has a good plot. It’s not your typical Greek myth fiction either. It has a twist to it that sheds a different light on the Greek gods. Seriously though, you might just end up falling love with Hades like I did.

Every girl who had taken the test has died.

It’s always been just Kate and her mom – and her mother is dying. Her last wish? To move back to her childhood home. So Kate’s going to start at a new school with no friends, no other family and the fear that her mother won’t live past the fall.

Then she meets Henry. Dark. Tortured. And mesmerizing. He claims to be Hades, god of the Underworld – and if she accepts his bargain, he’ll keep her mother alive while Kate tries to pass seven tests.

Kate is sure he’s crazy – until she sees him bring a girl back from the dead. Now saving her mother seems crazily possible. If she succeeds, she’ll become Henry’s future bride and a goddess.

View all posts by anjieeeb