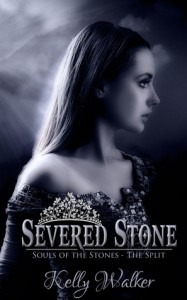 I want to thank Net Galley and Kelly Walker for giving me an ARC of the Severed Stone. I greatly appreciate your generosity. I was given this ARC in mind that I would give a honest review of the book.

Their story should have been a fairytale, but someone is playing a dangerous game that can only end in heartbreak.

When Ciorstan awakes alone in a field, far from home and more than a little confused, it won’t be the strangest thing to happen that day. Ignoring both her intuition and a mysterious but handsome stranger’s warning, she allows a dashing prince to take her home to his palace. Agreeing to marry the prince was her second mistake. Her next one will rip an entire kingdom apart. Sometimes, true love can be a tragedy with devastating consequences.

SEVERED STONE is a prequel novella, 155 pages in length and can be read at any point during the Souls of the Stones series. (But because it is designed to answer questions posed in Cornerstone and Second Stone, it may be more gratifying after reading those titles first.)

I want to start of by saying that I have not read Cornerstone or Second Stone. I decided it would be safe to read this novella since it is a prequel, and can be read at any point while reading the series. I do feel as if I was missing something as I was reading it though. I believe I was expecting more on the lines of The Infernal Devices since that is also a prequel, but I do have to keep in mind that TID is a trilogy.

The writing in the Severed Stone was good, but I wasn’t blown away. I felt like everything happened really quickly. The first third of the book I was enjoying, but then once Fidwen got involved, it was all just chaos. It was one thing after another and I was left with so many things in my head at once. I like where the story went but, I just feel like it could have been executed a little bit better. I am being very nit-picky at the moment just FYI. The chaos I felt within the novella could have been solved by adding a few more pages about the brothers and the queen and less about her in the gowns and the rainbow of girls that were to help Ciorstan out with her transition into the royal life.

Overall, it wasn’t a bad book, but it wasn’t a great one either. I liked it, but I didn’t love it. Some parts were cute and Cirostan’s creepy mother added to the haunting feel of the novella, which I loved. I think this book would have worked better as a novel than a novella.